Where Facts And Controversy In The News Come Together In Truth 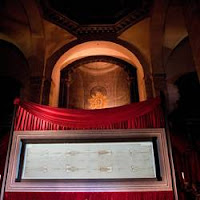 A series of experiments conducted by Italian researchers indicate the Shroud of Turin is likely authentic, but the team has not yet reached a definite conclusion. And if authentic, is it truly the face of Jesus?

According to the December 12, 2011 Vatican Insider, the National Agency for New Technologies, Energy and Sustainable Economic Development, has published a report on five years of experiments conducted in the ENEA center of Frascati on the shroud-like coloring of linen fabrics by far ultraviolet radiation.

With a lot of fair play and almost "en passant", this new report very clearly refutes the hypothesis that the Shroud of Turin might be the work of a medieval forger. The hypothesis was supported against many weighted arguments by the results of the disputable and probably biased - C14 measurements; a test whose credibility has been rendered ​​very fragile not only by objective difficulties but also from proven factual errors of calculation and the inability to obtain “raw data” from the laboratories for the necessary controls.

The report notes… “The double image (front and back) of a scourged and crucified man, barely visible on the linen cloth of the Shroud of Turin has many physical and chemical characteristics that are so particular that the staining which is identical in all its facets, would be impossible to obtain today in a laboratory, as discussed in numerous articles listed in the references. This inability to repeat (and therefore falsify) the image on the Shroud makes it impossible to formulate a reliable hypothesis on how the impression was made.

In fact, today Science is still not able to explain how the body image was formed on the Shroud. As a partial justification, Scientists complain that it is impossible to take direct measurements on the Shroud cloth. In fact, the latest in situ experimental analysis of the physical and chemical properties of the body image of the Shroud was carried out ​​in 1978 by a group of 31 scientists under the aegis of the Shroud of Turin Research Project, Inc. (STURP).

The scientists used modern equipment for the time, made ​​available by several manufacturers for a market value of two and a half million dollars, and took ​​a number of non-destructive infrared spectroscopy measurements, visible and ultraviolet, X-ray fluorescence, thermograph, pyrolysis, mass spectrometry, micro-Raman analysis, transmission photograph, microscopy, removal of fibrils and micro-chemical tests."

The analysis carried out on the Shroud did not find significant amounts of pigments (dyes, paints) or traces of designs.

Based on the results of dozens of measurements, the STURP researchers concluded that the body image is not painted nor printed, nor obtained by heating. Furthermore, the color of the image resides on the outer surface of the fibrils that make up the threads of the cloth, and recent measurements of fragments of the Shroud show that the thickness of staining is extremely thin, around 200 nm = 200 billionths of a meter, or one fifth of a thousandth of a millimeter, which corresponds to the thickness of the primary cell wall of the so-called single linen fiber. We recall that a single linen thread is made ​​up of about 200 fibrils.

Other important information derived from the results of the STURP measurements are as follows: The blood is human, and there is no image beneath the bloodstains; the gradient color contains three-dimensional information of the body; colored fibers (image) are more fragile than undyed fibers; surface staining of the fibrils of the image derive from an unknown process that caused oxidation, dehydration and conjugation in the structure of the cellulose of the linen."

In other words, the color is a result of an accelerated linen aging process.

As already mentioned, until now all attempts to reproduce an image on linen with the same characteristics have failed. Some researchers have obtained images with a similar appearance to the image of the Shroud, but nobody has been able to simultaneously reproduce all microscopic and macroscopic characteristics.

In this sense, the origin of the Shroud image is still unknown. This seems to be the core of the so-called mystery of the Shroud regardless of the age the Shroud, whether it is medieval (1260 - 1390) as shown by the controversial dating by radiocarbon, or older as indicated by other investigations.

“Regardless of the actual importance of controversial historical documents on the existence of the Shroud in the years preceding 1260, the most important question, the ‘question of questions’ remains the same, how did that body image appear on the Shroud?”

There are two possibilities, the scientists write, on how the sheet of the Shroud was placed around the corpse: placed above and below (not in full contact with the whole body stiffened by rigor mortis) or pressed on the body and tied in order to be in contact with almost the entire body surface.

The first method is supported by the fact that there is a precise relationship between the intensity (gradient) of the image and the distance between the body and the cloth. Furthermore, the image is also present in areas of the body not in contact with the cloth, such as immediately above and below the hands, and around the tip of the nose.

The second method is less likely because the typical geometric deformations of a three dimension body brought into contact in two dimension sheet are missing. Moreover, there is no imprint of body hips. Consequently, we can deduce that the image was not formed by contact between linen and body."

It is this observation, coupled with the extreme superficiality of the coloring and the lack of pigments that makes it extremely unlikely that a shroud-like picture was obtained using a chemical contact method, both in a modern laboratory and even more so by a hypothetical medieval forger.

There are no signs of putrefaction near the orifices, which usually occur around 40 hours after death. Consequently, the image is not the result of putrefaction gases and the corpse was not left in the sheet for more than two days.

One of the assumptions related to the formation of the image was that regarding some form of electromagnetic energy (such as a flash of light at short wavelength), which could fit the requirements for reproducing the main features of the Shroud image, such as superficiality of color, color gradient, the image also in areas of the body not in contact with the cloth and the absence of pigment on the sheet.

The first attempts made to reproduce the face on the Shroud by radiation, used a CO2 laser which produced an image on a linen fabric that is similar at a macroscopic level. However, microscopic analysis showed a coloring that is too deep and many charred linen threads, features that are incompatible with the Shroud image.

Instead, the results of ENEA show that a short and intense burst of VUV directional radiation can color a linen cloth so as to reproduce many of the peculiar characteristics of the body image on the Shroud of Turin, including shades of color, the surface color of the fibrils of the outer linen fabric, and the absence of fluorescence.

However, Enea scientists warn, "it should be noted that the total power of VUV radiations required to instantly color the surface of linen that corresponds to a human of average height, body surface area equal to = 2000 MW/cm2 17000 cm2 = 34 thousand billion watts makes it impractical today to reproduce the entire Shroud image using a single laser excimer, since this power cannot be produced by any VUV light source built to date." (the most powerful available on the market come to several billion watts )

Finally, the report states that the Shroud image has some features that scientists are not yet able to reproduce. For example, the gradient of the image caused by a different concentration of yellow colored fibrils that alternate with unstained fibrils”. And they warn: “We are not at the conclusion; we are composing pieces of a fascinating and complex scientific puzzle”.

The enigma of the image of the Shroud of Turin is still “a challenge for intelligence”, as John Paul II said.